Beginnings of the National Library

The National Library began in 1823 when Sir Stamford Raffles established Singapore’s first major educational institution, The Singapore Institution (now known as Raffles Institution). Raffles worked for the British East India Company and was a self-made man with a strong belief in the opportunities afforded by education. Soon after the founding of Singapore, Raffles proposed setting up an educational institution and stated that a library would support the college’s educational aims. Thus, the seeds of the National Library were sown.

Raffles laid the foundation stone in 1823 for the Singapore Institution, and the building was completed in 1837. Dr Robert Morrison, a missionary, philanthropist and educationist, became the first librarian and played a key role in developing the library.

The library was open to all students and staff of the Singapore Institution. And for 25 cents a month, any member of the public could also use the library and borrow books.

The library’s functions were expanded in 1849 with the mandate to administer a museum to highlight Malayan history.

In 1873, the Legislative Council passed a resolution for colonies to contribute "products depicting the antiquity and physical character of the Straits Settlements," and a local museum was considered a useful addition.  From 16 July 1874, the Singapore Library was known as the Raffles Library and Museum. The Library consisted of a reference library, a lending library and a reading room. It was used by over 4000 visitors in 1875, mostly naval officers and travellers in transit. Only a handful of the local population visited the library.

Since its early days, the National Library has actively tried to boost its collection of rare or scholarly materials, especially those on Singapore, Malaysia and the region.

Some notable donations include a box of books from the Trustees of the Library and Museum of Victoria, Australia. The 1875 Annual Report stated that 2000 books were purchased, and literary agents had helped to increase the library’s collection of Malayan literature. In addition, the Colonial Secretary’s Office received gazettes and reports from the government, which were subsequently passed to the library.

Amongst the National Library’s literary treasures is a rare book of great historical importance, The history of Trauayle in the West and East Indies, and other countreys lying eyther way, towardes the fruitfull and ryche Moluccaes. This book, printed in 1577, contains one of the earliest narratives of sea voyages.

On 12 October 1887, the Governor of Singapore, Sir Frederick Weld, officially opened the new building of the Raffles Library and Museum. Dr R. Hanitsch from University College, Liverpool, was appointed as the new Curator and Librarian in June 1895. The title of Curator and Librarian was later changed to Director to be consistent with similar appointments in the Straits Settlements and Federated Malay States. Hanitsch thus became the first Director of the Raffles Library and Museum in September 1908.

Hanitsch made several significant contributions to the library, such as being one of the first librarians to conduct a survey of visitors, creating the Singapore History Collection, and publishing a new catalogue after he had relabelled and renumbered all the works in the Library.

The Annual Reports of the 1930s stated that the library grew in popularity due to initiatives such as increased purchases, reorganisation of the non-fiction section, quarterly bulletins of new titles, and periodic lists of new acquisitions published in the local newspapers. In 1932, a legal section was formed, which included all publications on laws, enactments and ordinances of the Straits Settlements and the Malay States, government gazettes and printed matter of an official nature. Such materials from the Straits Settlements can still be found at the National Library.

For two weeks before Singapore fell to the Japanese on 15 February 1942, the British and Australian forces occupied the library as a Regimental Aid Station. After that, it was closed and officially reopened on 29 April 1942, on the Japanese Emperor’s birthday.

The Raffles Library and Museum was renamed the Syonan Hakubutsu Kan (Syonan Museum) as the museum was more eminent than the library during the pre-war period. The library section was known as the Syonan Tosyokan (Syonan Library) and was headed by Marquis Yoshichika Tokugawa. Tokugawa was related to the Emperor of Japan, a situation beneficial to safeguarding the library and its collections.

While many buildings were damaged or destroyed during the war, the library remained largely unscathed, with only about 500 reference books lost through theft or damage. This was a small amount compared to the losses suffered by other libraries in Malaya. This was mainly due to the reputation of the museum and the commitment of two individuals, Professor Hidezo Tanakadate from Tohoku Imperial University and E. J. H Corner, a former Assistant Director of Gardens. They were both committed to preserving library materials of historical interest.

Tanakadate was instrumental in his attempt to rescue books and collections from damaged houses and offices. Lorries full of books and journals were retrieved from the libraries of civil service departments such as the Agricultural Fisheries office and the Colonial Secretary’s Office. In just one month, more than 40,000 books were brought into the Raffles Library.

The library was reopened to the public under British Administration on 1 December 1945. The perseverance, steadfastness, and relative safety of the library during the Japanese Occupation cemented the role and importance of the library as a symbol of Singapore’s cultural heritage and a place for shared knowledge and experiences.

The post-war years brought considerable change to the Raffles Library. Several plans were made to improve services to the public, such as setting up a Branch Library Scheme to improve access for residents.

Other proposed changes included setting up a free public library. This idea came to fruition with a contribution of $375,000 in 1953 from rubber magnate and philanthropist Lee Kong Chian, who was keen to promote the use of vernacular languages in the public arena. He donated on the condition that the library would be available to the public and free for all.

A new phase of the library system began in the 1950s with the appointment of L. M. Harrod, a librarian, as director of the Raffles Library. Harrod played a significant role in expanding and modernising the library and was also essential in the eventual separation of the library and museum. He introduced the Browne system to issue books, which the library used until a computerised library system was introduced in 1988. He also translated children’s books into Chinese, Malay and Tamil to reach out to the local population.

The National Library at Stamford Road 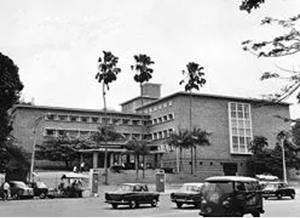 A black-and-white photograph of the old library building at Stamford Road. [All Rights Reserved. National Library Board Singapore 2004].

Harrod’s most visible legacy was the design of the National Library building, a joint effort with Lionel Bintley, a British architect with the Public Works Department. The site of the building was along Stamford Road to the south of Raffles Museum. The Stamford Road site had previously been occupied by the St Andrew’s Chapel and School buildings from 1875 to 1940, after which it became the British Council Building.

On 15 August 1957, Lee Kong Chian laid the foundation stone of the National Library at Stamford Road.

The National Library building, which was supposed to reflect the red-brick epoch of British architecture in the 1950s, received mixed reviews. Most criticised the aesthetics of the building, which stood in contrast to the dignified and Victorian style architecture of the National Museum. However, the library building was four times larger than its old size and brought much-needed space. 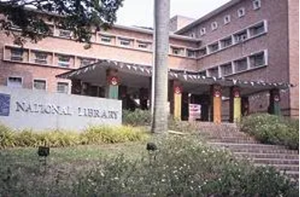 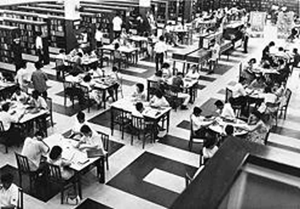 A black and white top view photograph of the well-patronised reading area in the library. [All Rights Reserved. National Library Board Singapore 2004]. 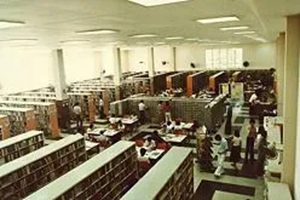 Aerial view of the library's reading area with its distinct tiled floor in black and white, wall fans and card catalogue cabinets in the centre.
[All Rights Reserved. National Library Board Singapore 2004.]

The First Singaporean Director of the National Library

Hedwig Anuar succeeded Harrod to become the first Singaporean director of the National Library. She held this post for more than two decades, from April 1960 to June 1961 and from 1965 to 1988. One of her major tasks was overseeing the library’s relocation from the Raffles Museum site to the new building in November 1960. Dubbed “Operation Pindah,” all 40-odd library staff formed a human chain to pass 150,000 books, and the relocation was complete in just two weeks. 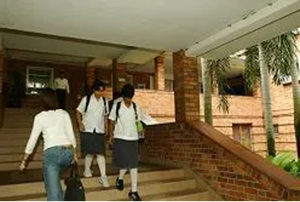 The Raffles Library was renamed the National Library, a symbolic move away from its colonial beginnings. The head of state, Yang di-Pertuan Negara Yusof Ishak, officially opened the library on 12 November 1960.

One of Anuar’s significant contributions was mobile library services. Through a US$2,000 donation from UNESCO, library vans were purchased and used from 1960 as part of the library’s efforts to decentralise and reach out to schoolchildren. Mobile library services were introduced in West Coast, Tanjong Pagar, Nee Soon, Bukit Panjang, Sembawang, Tampines, Pasir Panjang, Bukit Timah, Changi and Kaki Bukit. This brought the library to the local population, a vision that Harrod, the Library’s first director, strongly believed in. The mobile library service was phased out from the 1980s with the construction of branch libraries and terminated in 1991. It was later revived in 2008 as Molly, the Mobile Library, using a refitted SBS Transit bus.

The National Library also expanded its services to the public by increasing its collections through gifts, donations, and government grants.

Yoke-Lan Wicks succeeded Anuar as director of the National Library from 1988 to 1992 and was responsible for setting up the first branch library in Queenstown.

The iconic, red-bricked National Library building at Stamford Road closed its doors for the last time on 31 March 2004, six years after the government announced that the building would be demolished for urban redevelopment. Given the special place of the National Library in the hearts and minds of many Singaporeans, a year-long series of events commemorated the closing of this chapter and the beginning of a new one.

Half a century later, Lee Kong Chian’s legacy and support continued with a $60 million donation from the Lee Foundation towards developing the new (and current) National Library at Victoria Street.

The reference library is named in honour of Lee Kong Chian.